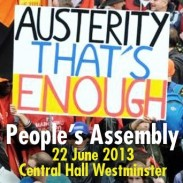 This is a call to all those millions of people in Britain who face an impoverished and uncertain year as their wages, jobs, conditions and welfare provision come under renewed attack by the government.

With some 80 percent of austerity measures still to come and with the government  lengthening the time they expect cuts to last we are calling a People’s Assembly Against Austerity that aspires to bring together campaigns against cuts and privatisation with trade unionists in a movement for social justice. We aim to develop a strategy for resistance to mobilise millions of people against the ConDem government.

The Assembly will provide a national forum for building confidence of those promoting anti-austerity views which, whilst increasingly popular, are barely represented in Parliament.

A Peoples’ Assembly can play a key role in ensuring that this uncaring government faces a movement of opposition broad enough and powerful enough to generate the conditions where successful co-ordinated action called by the unions, including strike action, is possible.

The Assembly will have the ambition, mindful of the political situation and level of preparedness at the time, to call for support for maximum co-ordinated industrial action and national demonstrations against austerity, if possible synchronising with similar mobilisations across Europe.