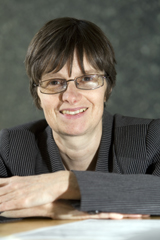 Three very different events are running this weekend during the visit to South East Dorset of our Green Party MEP, Molly Scott Cato. Ask Molly a question online, join a debate at BU, or get active and join our local election campaign on the ground... or why not do all three?!

Molly says: "You can ask me anything about the EU, Brexit, the Green Party or my work as an MEP. My speciality areas - thrilling as they are! - are tax, Latin America, sustainable finance, and also food and farming."

• We encourage you to submit your advance question, by email to socialmedia@sedorset.greenparty.org.uk - or you can interact live with Molly during the broadcast.

"People and Power: Populism, Fascism & How to Defend Democracy"

This is the final panel debate about populism, creeping fascism, and the rollback of democracy in post-Brexit Britain in a tour taking place across the South West.

Joining Molly Scott Cato MEP, will be historian Benjamin Bland from the University of London and Dan Weissmann from the Faculty of Media & Communications, Bournemouth University. One further guest to be confirmed. The event will be chaired by Dame Annette Brooke, former MP (LibDem) for Mid Dorset & North Poole.

There are less than three months left till Bournemouth's council elections on May 2nd! Get involved - come and help the campaign to get Councillor Simon Bull re-elected, and Chris Rigby elected alongside him in Winton East, at our action day, with special guest Molly Scott Cato MEP.
Facebook event page: https://www.facebook.com/events/416810822225193/

Meet other friendly Greens, and find out what's going on in your community and about our election campaign.

• If you've not door-knocked before but you're open to spreading the Green message to residents, we'll show you how to get started and pair you up with someone more experienced.

• It's also likely that we'll have our new ward newsletter (covering the oil rig) ready to deliver door-to-door. We expect to have leafleting rounds available, if you prefer not to canvass residents.

Running significantly late? If we've already left Conto Lounge when you arrive, call Simon on 07957 206806 to catch up with us.