The results of the 2019 General Election brought solid increases in the Green Party vote share across South East Dorset.

The vote total, vote share and vote share increase for each local Green candidate were as follows:

Below are constituency-by-constituency results with reaction from each local Green candidate. 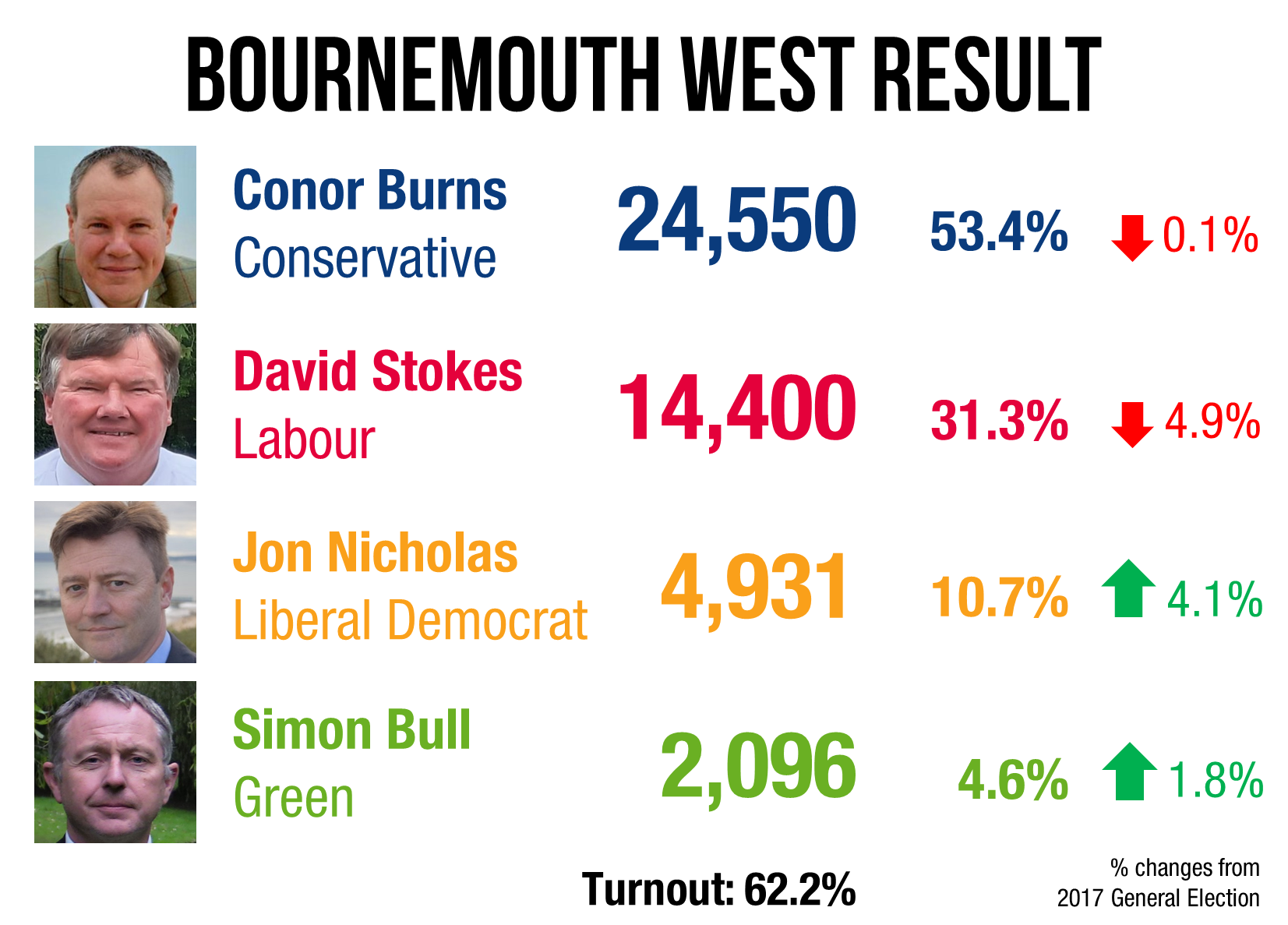 Simon Bull commented: "That was a disappointing night in many regards. I take some hope in the increased Green vote across the country and Caroline Lucas's increased majority. Locally the five constituencies all returned increased Green Party vote shares over the 2017 Election. Brexit will, most likely, go through and we will have to make the best of that whilst seeing what a Johnson government looks like. Perhaps Labour will have a rethink on proportional representation.

"Thank you to everyone who voted for me or for another Green Party candidate, all those who distributed leaflets, displayed posters, sent messages of support (before and after the result), and all those involved in Green politics locally, nationally and internationally especially the local team who have been amazing during this campaign - Thank You." 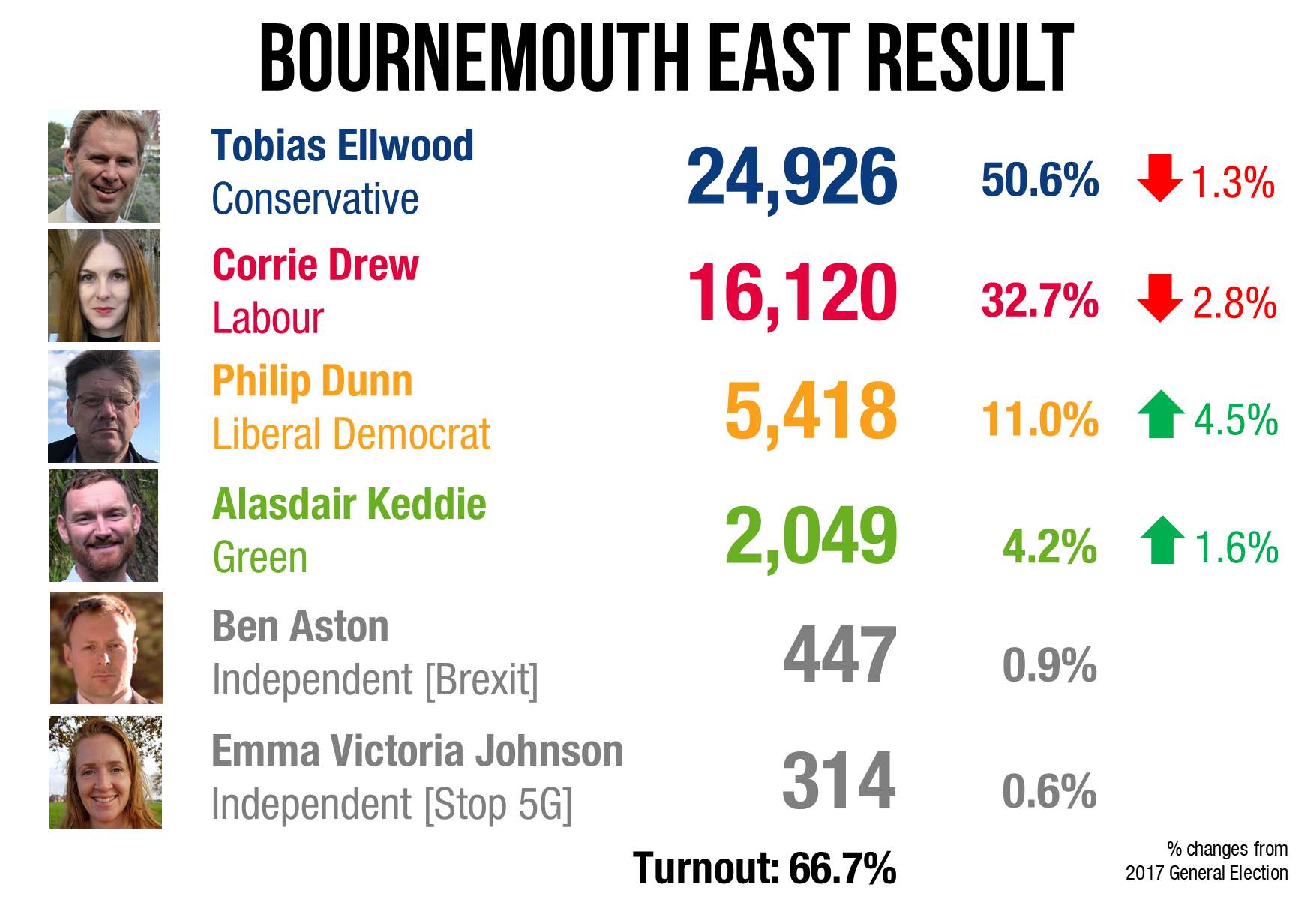 Alasdair Keddie said: "I'm really pleased with how the Green Party conducted themselves, despite the almost hysterical tone around tactical voting. This election has has left the other opposition parties leaderless and missionless, they will have to reinvent themselves in order to survive. In contrast, The Green Party did not compromise its core values, we increased our vote share nationally by 60% and stand ready to continue our fight for climate action and a fair society." 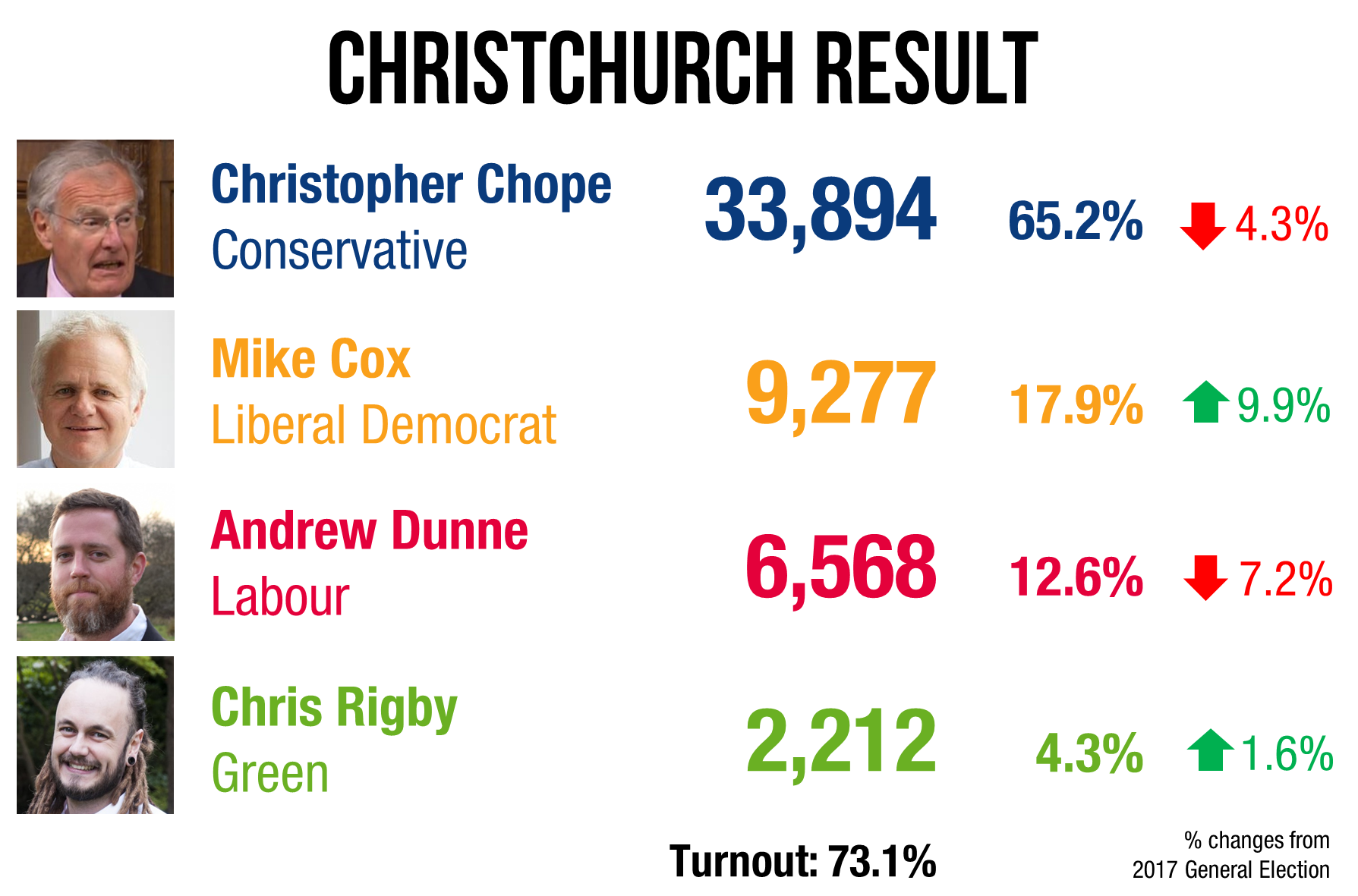 [Alternative link to Christchurch result if image above cannot be seen]

Chris Rigby commented: "Thank you for all your support throughout the campaign, really pleased to see the Green vote share increasing, this is a time when our Green voice will be more important than ever. From within communities, environmental groups, councils, and our still sole voice in Westminster.

"To whoever decorated your polling cards with hearts to vote for me. To everyone else who voted for me thank you so much, I'm not going anywhere and will still be standing up for our futures. 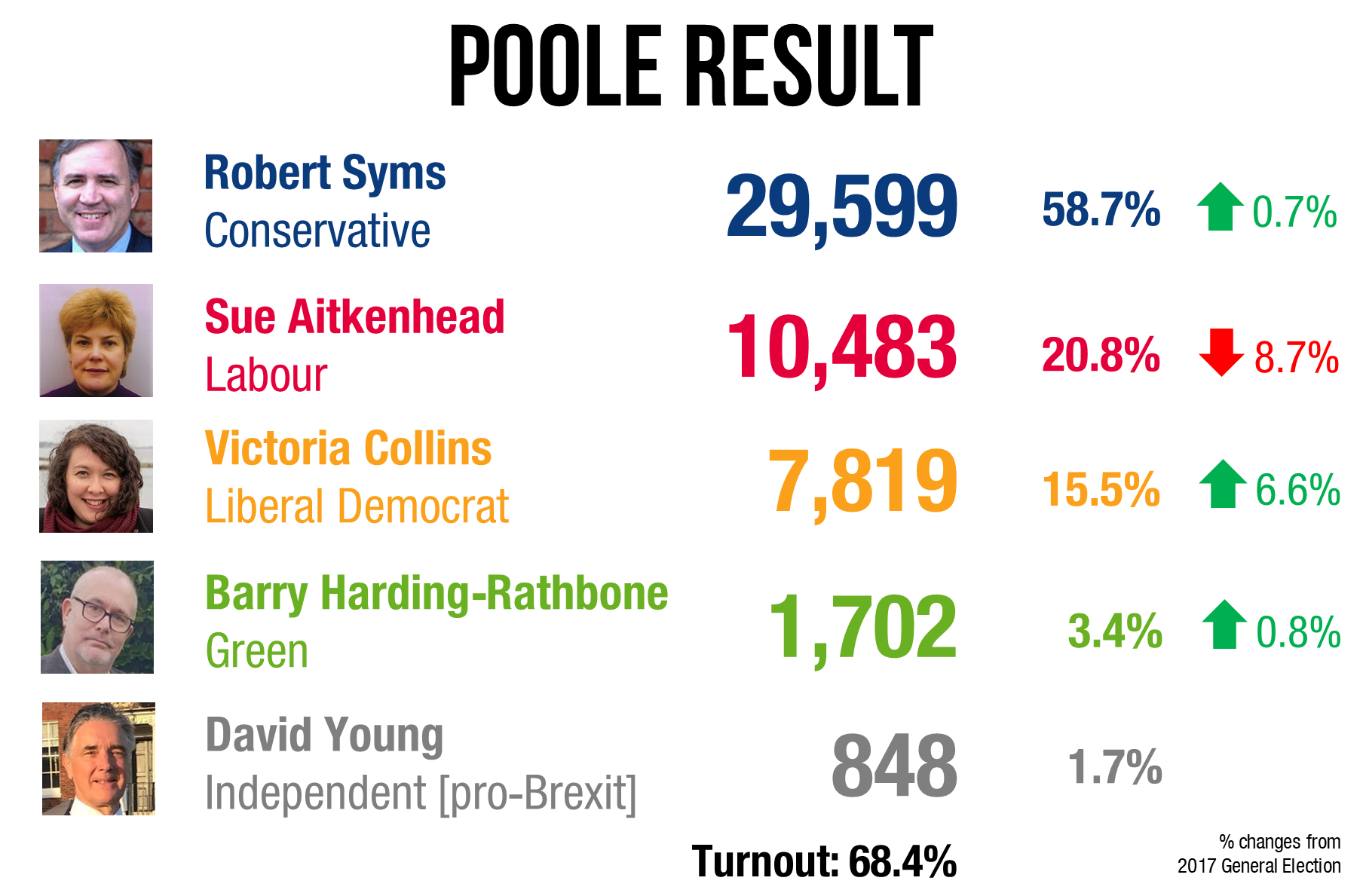 [Alternative link to Poole result if image above cannot be seen]

Barry Harding-Rathbone said: "Words cannot stress how very disappointing the national result overni has been, for every right thinking person in the country. Let's keep strong and focused on the main prize and keep the pressure on the Cons to fulfil ALL their manifesto pledges and in most of them, push them to achieve more. Like the seas, we continue to rise and, like the winds, our voice will only get stronger.

"Nationally, every single result has shown that, because people believe in facing up to our responsibilities over the climate crisis - and I am so very proud to be part of the only party to make this the 'Climate Election' & to have made the issue front & centre, and the changes we need to make - NOW for not only the future of the planet, but also our community's well being and equality after a decade of austerity, our vote count and share has increased dramatically.

"So massive thank yous to each & every one of you who made this happen, from your voting yesterday to the hard work volunteered by those of you who braved the streets to get our message out." 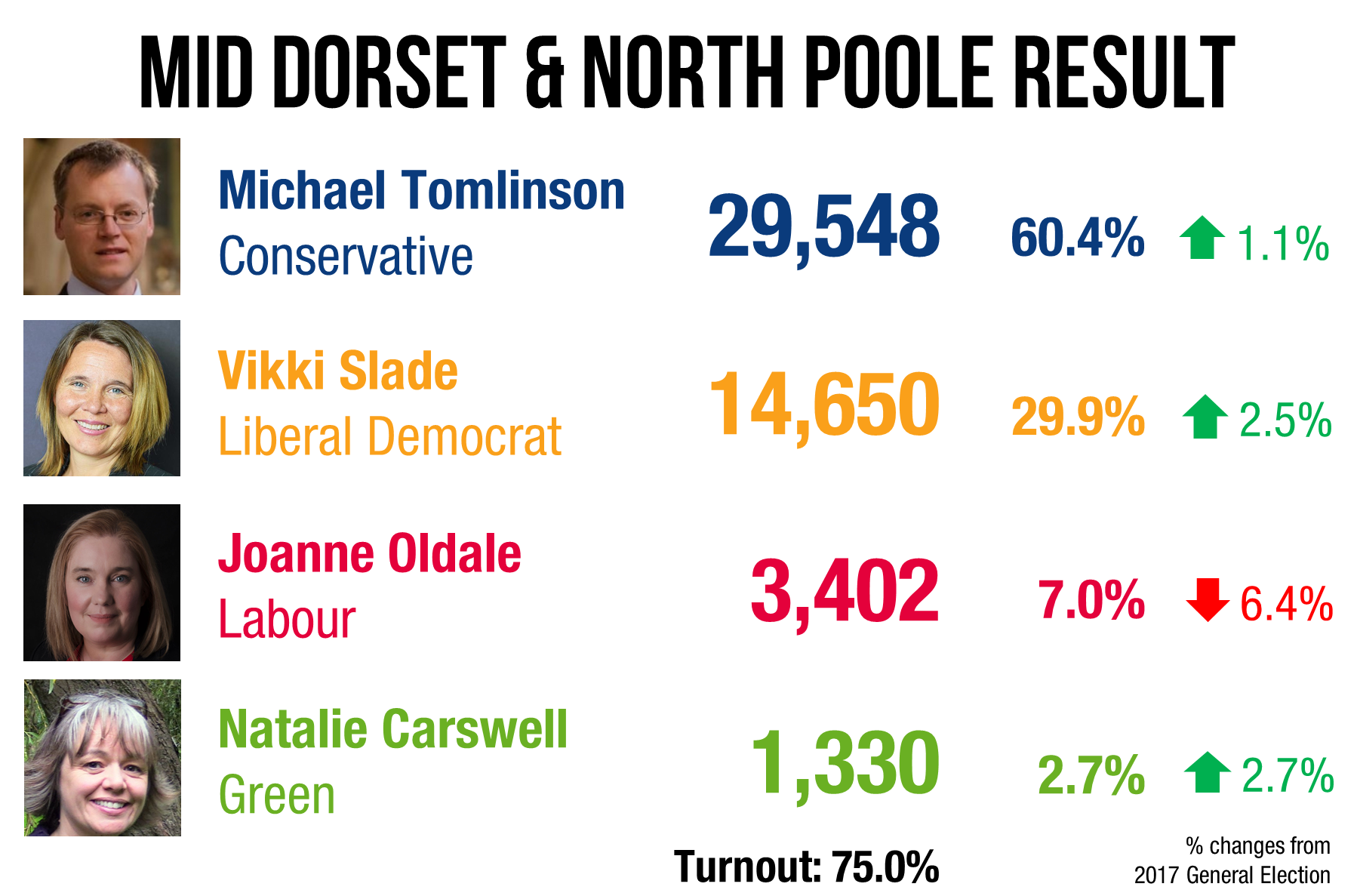 Natalie Carswell commented: "Thanks to everyone who helped out in this election. We will work at growing in this area because our children, young people and planet, have been let down tonight by the 'grown ups' voting Tory... Please let me know if you want to change the world."