Hundreds turn out to #BlackLivesMatter protest in Bournemouth 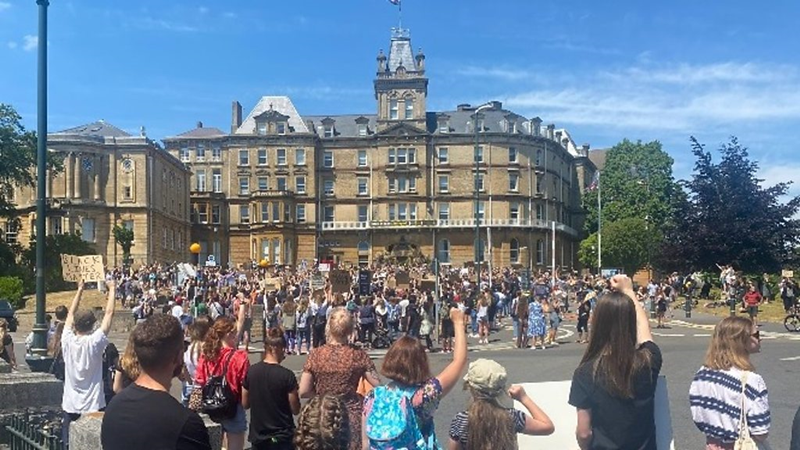 Hundreds of peaceful protesters gathered in Bournemouth on Tuesday 2nd June to protest against the death in Minneapolis of unarmed black man George Floyd while a police officer knelt on his neck to pin him.

Signs were held up saying 'Black Lives Matter' and 'Justice for George' during a peaceful gathering at Bournemouth Square, the gardens and outside the Town Hall.

The Bournemouth Echo carried a fuller report on the event.

Green Party Councillor Chris Rigby said: "Yesterday I took my lunch break and managed to get to this demonstration for a short while.

"Being able to add my voice to the hundreds of others in Bournemouth yesterday was important. The UK is not innocent, and this is a crucial moment for BAME communities to have their voice heard, as councillors we need to set an example, add our voices, vocalise our intentions and awknowledge that real changes are needed. We start by saying black lives matter."

The Green Party endorses the call from Dorset Police (who were making a commitment to allow safe and peaceful protests) that: “Social distancing remains critical and we would ask anyone taking part in such gatherings or any protest to observe these measures to protect themselves and others.”

On social distancing at the Bournemouth event, Chris Rigby added: "I personally took precautions with PPE as did many others. Social distancing in the square was good, as was the walk through the gardens, however crossing from the gardens to the Town Hall was held up by police controlling traffic and the flow of protesters hit a gridlock causing bunching up.

"Personally I chose not to walk through the gardens and stayed on the pavement. "Once at the Town Hall there was social distancing again, probably not 2m but at least 1m.

"I think some views are deceiving on the photos and there were also small groups of two and three people who I assumed lived together. I as I guess most did weighed up the risk/benefit of attending."