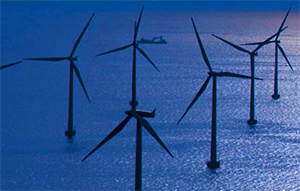 Several of our members attended a demonstration held in Swanage in January to support the Navitus Offshore Wind Farm.  This was organised by Friends of the Earth and was planned to coincide with an anti-windfarm demonstration.

There were about 100 supporters (outnumbered 3-1 by protestors) and many different green-minded groups were represented, including Greenpeace, Transition groups, and Wind for Dorset.

Press coverage was well-balanced and made the national as well as local papers.