The Green Party Conference in Bournemouth - Speaking Truth To Power.

The Green Party Conference in Bournemouth - Speaking Truth To Power.

“The heavy snowfall just before the start of conference caused many delegates to abandon the trip to the usually sunny Bournemouth, although many persevered and I heard stories of overnight stays on broken down trains and long, cold journeys from across the country, one taking 29 hours from Cambridge.

“I came out on the Friday night to host the Association of Green Councillors (AGC) open invitation meal - good food and good company made up for the depleted size of the gathering.

“On Saturday I headed down with a councillor from Bristol and a local member to the Bournemouth International Centre; the roads were much clearer and buses were running again. When I got to the centre there was a good buzz and it was a hive of activity as people arrived, registered and worked out what meetings and fringes they wanted to be at. 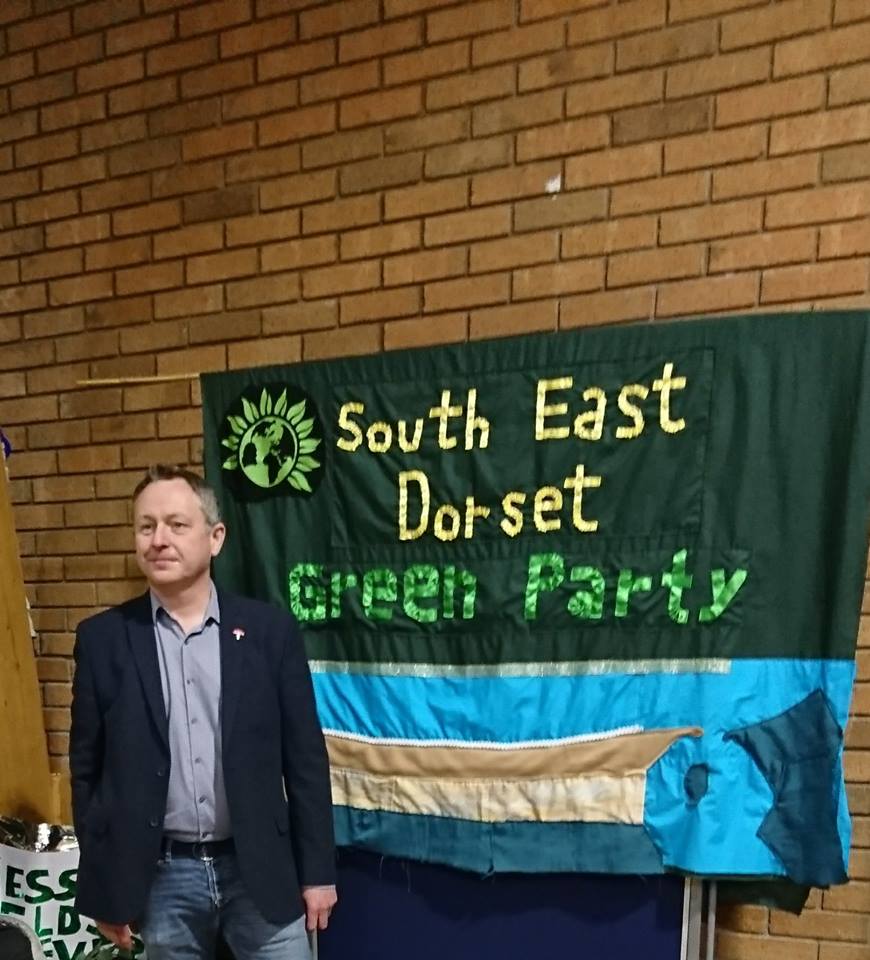 “The South East Dorset Stall was well attended, and our thanks should go to Geoffrey and Ian who were there for most of the two days of conference. The stall looked even better when the handmade banner arrived.  (The picture shows Simon with the banner.)

“The Conference theme was ‘Speaking Truth To Power’ something we the Green Party do, and need to continue to do.

“The leaders’ speeches were motivating and inspiring. They started by thanking everyone who had managed to get here and then praised the local Greens. We heard about Sheffield, and the Labour Council’s destruction of trees and their attack on Alison Teal, the Yarl’s Wood hunger strike, Brexit and about Buses.

“The workshops and fringe meetings were diverse and interesting with topics such as ‘Acknowledging Animal Sentience’, ‘Free sanitary products for young people’ and ‘Acknowledging children's right to access to nature’; this last one was passed as a motion during the conference. The AGC put on a fringe event ‘Councillors tackling rough sleeping and homelessness at the local level’ which was well attended, and the conference charity Hope for Food’s representative Claire Matthews shared some local experience on the topic along with Cllr Jonathan Essex (Reigate and Banstead, and Surrey) and Cllr Craig Simmons (Oxford).

“Amelia Womack spoke about an equal society and perhaps she laboured the point but it is a valid point. The full speech is here.

“The number of delegates may have been less than other conferences but the atmosphere and attitude was positive and engaging. The final act was an emergency motion in response to, and against, Owen Jones’s assertion that GPEW should affiliate with the Labour Party; the motion was convincingly and firmly passed.”

“To what was billed as ‘spring conference’ but feels more like a mid-winter one, thank you all for getting here - through snow drifts, freezing rain, train delays and road closures. And can I say a special thanks to the Green Party Staff who slept on cold trains and in a van overnight to get here early to set up. I think they deserve a round of applause.

“It’s good to be here again.

“In a region that elected its first ever Green MEP in 2014.

“In a town that elected its first Green councillor in 2015.

“And where in the 2017 general election, every voter in South East Dorset had the chance to vote for a Green candidate.

“A place where the Green Party is at the forefront of speaking truth to power.”

The full text of her speech can be read here.

“We received some fantastic feedback, with members particularly liking its more intimate feel. Does this support the notion of regional spring conferences?

“Either way this is not a conference that any of us will forget in a hurry!”