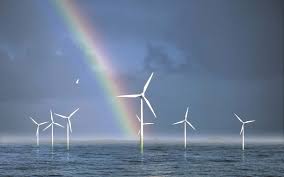 Bournemouth Echo reports that a fresh proposal to build a wind farm off the Dorset coast would be welcomed by BCP Council’s planning committee chief, Green Party Councillor Simon Bull.

The subject of building the source of renewable energy in the sea had gone quiet since the Navitus Bay project hit the buffers in 2015.

Debate has reignited over the controversial vision to build a large wind farm in the English Channel that would be visible from the shoreline.

BCP Council members took the decision to acknowledge a responsibility in tackling climate change last summer, with the aim of the local authority being carbon neutral by 2030.

Following this decision, campaigners have challenged council leaders to take significant steps to support the environment.

Green Party councillor and chair of BCP Council’s planning committee Simon Bull would welcome a proposal and said: “It is right that all options for supplying energy are considered. There is a climate and ecological emergency, the effects which are felt daily. We need to use alternative sources for our energy going forward and wind will be key. Any proposal would need to be fully scrutinised and I would hope a decision to go ahead or not would be based on the need and the facts.”

The scrapped project by EDF Energy and Eneco would have seen up to 121 turbines sited 13 miles from Bournemouth and Poole and nine miles from Swanage. Objections were raised by MPs, local authorities and residents back in 2015 and many opinions remain unchanged.

The full article can be read here.