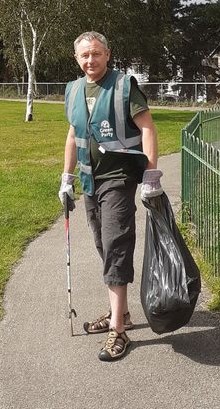 On Wednesday 26th August another Litter Pick took place in Winton. These events are organised by Carly Webster of Webster Family Butchers and Emma Martineau of Phones4businessfor and supported by Winton East Green Party Councillors, Simon Bull and Chris Rigby. Chris was unable to attend this time due to work commitments, but said he loves to see the community coming together and helping to keep our streets clean. He would like to arrange one for a weekend so that those who work through the week are able to take part.

Simon reported that during the morning the volunteers worked in Winton High Street, picking up litter, weeding, gardening and sweeping. In the afternoon they moved on to Winton Rec. for a quick litter pick. He said it was a “terrific turn out for another Winton cleanup today”.

Chris said it was “brilliant to see so many youngsters with their Mums and Dads come along and even one or two have since then joined our community group. DorsetDevils.org. We easily found a dozen discarded PPE face masks which was a disappointment.

They would like to thank Carly and Emma for organising this event again, and also thank the generosity of Georgia and her assistant at Coffee#1, Winton for letting the volunteers use their facilities and keeping them refreshed with drinks and cakes.